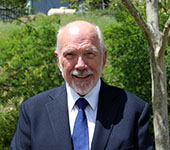 eorge Osborne is the longest-serving member of the current EID board, George was first elected to fill the remainder of an unexpired term in 2001 and then to full terms in 2003, 2007, and 2011. He was reelected for his fifth term in 2016.

George, a career firefighter worked for 41 years with the California Department of Forestry and Fire Protection (Cal Fire). He retired as chief of the Amador-El Dorado-Alpine Unit, a position that focused on the management of fire and emergency service operations. He is also a P.O.S.T. certified peace officer.

He lives with his wife, Carol, in Camino.