The year 2015 marks a major milestone for the District, as this is the 90th year that the District has been in business. On October 5, 1925, the District was formed by county residents with the purpose of providing water for farming. In those days, water was also essential to gold mining as well. Water rights became more precious than the gold that was mined from the local mountainsides and streams. Not much has changed in these ninety years. Water rights are still a hot topic, especially contentious during the stubborn drought we’ve endured these past three years. Click on the image at right to read an article from the Mountain Democrat about EID's 90th anniversary.

The famous words attributed to Mark Twain “whiskey is for drinking and water is for fighting” have never been truer! And, water is still essential to our ag. community, as agriculture remains one of the top revenue-generators in the County. Apple Hill’s regional draw provides the public with a rich tourism experience that is second to none.

Setting the Stage for EID 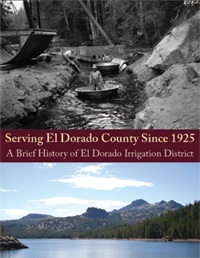 Water has been and continues to be an undeniable force in shaping the economic, ecological, and cultural face of El Dorado County. And El Dorado Irrigation District has been at the forefront of providing essential water services in the county since 1925.
The District’s history is closely intertwined with early development of water resources, tracing back to California’s historic gold rush days. When James W. Marshall picked up that first nugget at Coloma in January 1848, he triggered a human migration with few equals. “Gold!” was heard around the world, and tens of thousands headed for the Mother Lode.
Water was essential to successful mining—and to agriculture, which grew side by side with the mines. The development of hydropower production in the early 1900s brought a new competitor for water onto the scene. Water rights became more precious than gold hard-scrabbled from unforgiving ground and stubborn mountainsides.
So it remains today.
The First 30 Years—Securing a Reliable Water Supply
In 1925, some 77 years after Marshall’s discovery of gold and in the face of growing competition for water from hydropower producers, El Dorado County residents voted to form El Dorado Irrigation District. The reasons? To protect water filings, ensure a secure water supply, keep irrigation rates reasonable, and increase the value of agricultural lands.
The emphasis on agriculture was understandable. By 1920, thousands of acres were in crop production, fed mostly by old mining ditches that relied on uncertain precipitation patterns and little storage. Indeed, adequate water for agricultural irrigation and domestic needs was the focus of the EID Board of Directors’ first meeting: “The question arose as to the water shortage for the coming irrigation season, and it was the consensus that every effort be made to bring about immediate relief.”
Two years later, the District purchased the water storage and distribution system of the financially troubled El Dorado Water Corporation. Facilities and infrastructure consisted of about 70 miles of main laterals and ditches as well as Weber Reservoir, which the corporation completed in 1924. For the next few decades, EID sought new water supplies. Faced with the Great Depression and other woes, finances were tight. But demand for water continued to rise, spurred by more land in agricultural production and a growing population. By the 1950s, there were nearly as many people in El Dorado County as there were during the apex of the 1850s–1860s mining days.
The culmination of a long-held dream came with completion of the Sly Park reservoir, now known as Jenkinson Lake, in the mid-1950s. Built by the U.S. Bureau of Reclamation as part of California’s Central Valley Project, the reservoir and surrounding recreation lands were officially transferred into EID ownership in late 2003.