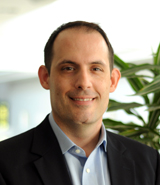 Maintaining positive communications with customers, the general public, and other stakeholders throughout EID’s service areas and wider region is an important function of this department.

Jesse Saich is EID's communications and media relations manager and acts as the district’s primary spokesman. He has worked in communications positions at EID since 2006. Prior to his work at the district, Jesse held positions in the private sector in the United States and Europe as a copywriter, editor, and teacher.

Jesse serves as the primary contact for all media inquiries and facilitates communication with EID customers, businesses, and other community and regional stakeholders regarding district services and projects. He communicates directly with members of the media in both preparing and placing stories of general interest to EID’s customers and the wider community. In case of an emergency, he—in coordination with other public safety personnel—helps disseminate and coordinate vital information to ensure public safety.

Committed to representing EID's interests and helping to shape communications activities at the state level, Jesse is an active member of the Association of California Water Agencies’ Communications Committee.

Jesse and his wife, Andreja, live in Placerville with their son.