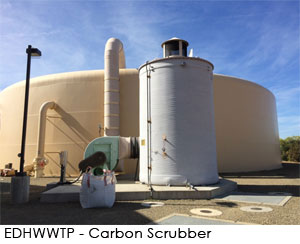 The El Dorado Hills Wastewater Treatment Plant (EDHWWTP) is located east of Latrobe Road within the community of El Dorado Hills.  When the plant was originally constructed in 1962 the area was very remote.  Since then the facility has consistently been encroached upon as the community has expanded south of Highway 50. Most recently, the Blackstone residential community was developed that included some residential lots located within 300 feet of the plant. As part of its National Pollutant Discharge Elimination System (NPDES) permit issued by the Regional Water Quality Control Board to operate the facility, the District is required to prevent objectionable odors from leaving the District’s property. Additionally, terms of the Permit to Operate issued by El Dorado County Air Quality Management District (AQMD) prohibit the discharge of objectionable odors from our facility. The EDHWWTP has received a number of odor complaints from residents as well as notice from the AQMD regarding concerns over potential odors emanating from the facility.

Although each of the equalization tanks has an existing carbon scrubber odor control unit, these scrubbers have proven to be problematic as each of the units has suffered internal structural failure. Additionally, the carbon media requires routine replacement, costing approximately $50,000 annually. The headworks area is currently served by two biofilters via foul air

ducting; however, more inlets are needed to improve capture of foul odors.

Staff has proposed that the two existing carbon scrubbers be replaced with a single biotrickling filter that will serve both equalization tanks and additional foul air ducting for the headworks area. We anticipate the biotrickling filter commissioning to take place mid--December 2019.

At the conclusion of construction of the odor control upgrades, the plant will undergo a comprehensive air balance of the foul air removal system effort in attempts to identify and control any additional locations of foul air emission.

The District, acting as the Lead Agency, must comply with California Environmental Quality Act (CEQA) requirements for the project. Staff has determined that the proposed project falls within a Class 1 CEQA Categorical Exemption as the maintenance and repair of existing facilities involving negligible or no expansion of use beyond that existing at the time of the lead agency‘s determination (CEQA Guidelines §15301). Staff has prepared and filed a Notice of Exemption from CEQA with the El Dorado County Recorder-Clerk's office.

Funding and Award of Contract

The Board awarded the contract to Kiewit Infrastructure West Co. as the lowest responsible bidder at their the April 8, 2019 regular Board meeting.