The EID Board took action at the public hearing on the Cost-of-Service Rate Study Update and adopted a resolution on the rate changes and increases that were reflected in the 2020 Proposition 218 Notice. Please see the minutes for item #7 to read the action taken.

Proposition 218 mailer has been sent to notify you of PROPOSED new rates for water, wastewater, and recycled water services, as required by Article XIII D, Section 6, of the California Constitution (Proposition 218).

PRIOR TO THE BOARD TAKING ANY ACTION YOU HAVE AN OPPORTUNITY TO BE HEARD AT THE FOLLOWING SCHEDULED OPEN HOUSE / PUBLIC WORKSHOPS.

Why are Rate Increases Needed?
EID is committed to providing safe, reliable, and high-quality water, wastewater, and recycled water services for our customers. To meet this commitment, the District develops regularly updated long-term financial plans that are designed to ensure there are adequate funds to make the necessary infrastructure investments to maintain safe and reliable service. This is done by striking a balance between funding infrastructure through current cash flow (pay-as-you-go) and the need to borrow funds for more costly projects.

As our water, sewer, and recycled water systems age, it is important to continue investing in replacement and upgrades of these assets in accordance with a long-term, balanced financing plan.

Based on the most recent board-approved financial plan, it has been determined that rate increases are necessary for EID’s water, wastewater, and recycled water service fees to enable the District to recover current and projected costs of operations and maintenance; fund capital infrastructure improvements vital for providing safe and reliable water service; maintain the operational and financial stability of the utilities; and avoid operational deficits and depletion of reserves.

What are Debt Service Obligations?
Rates help pay for the District’s debt service obligations, which we incur when we have to fund millions of dollars’ worth of capital improvements to continue to provide high-quality water and wastewater services. Many of the improvements are needed to replace aging and deteriorated infrastructure.

We finance long-lived (50 to 100 years) projects much like homeowners who borrow money to finance their homes and then pay interest and principal on the loans. In 2020, EID plans a water bond issuance of approximately $60 million to rebuild or replace vital infrastructure (see below for more details) to provide safe and reliable drinking water. We issue low-interest bonds to cover our capital costs and pay the principal and interest from revenues. But we are held to stricter financing standards than most home mortgages. EID has a legal obligation to ensure that our net revenues exceed our debt service costs by 25 percent each year.

The major components of operating expenses are labor, services/material costs, and regulatory fees.

Labor: A variety of EID employees work every day to provide our customers with the best service possible, 24/7. Here are just a sampling of the highly qualified professionals who keep our customers in service. Operators run the water and wastewater treatment plants and water delivery and wastewater collection systems. Construction and maintenance crews replace and repair pipes and other infrastructure. Engineers design and oversee construction projects. Environmental analysts keep the district in compliance with a multitude of state and federal regulations. Information technology specialists construct and manage sophisticated electronic systems. Office staff answer your billing and service-related questions.

Non-labor expenses include (among others) water charges, regulatory fees, and the costs of chemicals, energy to run all facilities, and fuel for emergency generators.

FOLSOM LAKE INTAKE IMPROVEMENTS: $24M
The Folsom Lake Intake is a critical component to EID’s raw water supply. It is EID’s sole source of water from Folsom Lake, which makes up approximately one third of EID’s entire water supply. Given its age and deteriorated condition, past pump failures, ongoing safety issues, and the difficulty in obtaining repair parts for 1958 vintage booster pumps, EID has made replacement of the facility a high priority for the District. 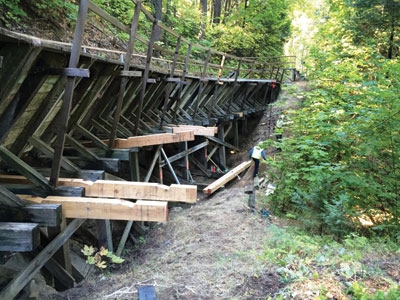 Flumes and canals are a vital component of EID’s complex water conveyance system. They deliver approximately one-third of EID’s drinking water supply to its customers. The canal and its flumes run through steep and often hard-to-reach terrain in areas prone to landslide and fire, as well as tree and rock fall. Rebuilding dilapidated flumes in the District’s Project 184 delivery system will significantly reduce the risk of catastropic failure and will enhance water supply and power generation reliability.

The Apple Hill and Gold Hill agricultural areas, the City of Placerville, and communities west of Placerville to Cameron Park are served jointly by water from the El Dorado Canal and Sly Park’s Jenkinson Lake. The canal even contributes to supplying El Dorado Hills for a good portion of the year. New flumes and canals should have a lifespan of 50 years or more. 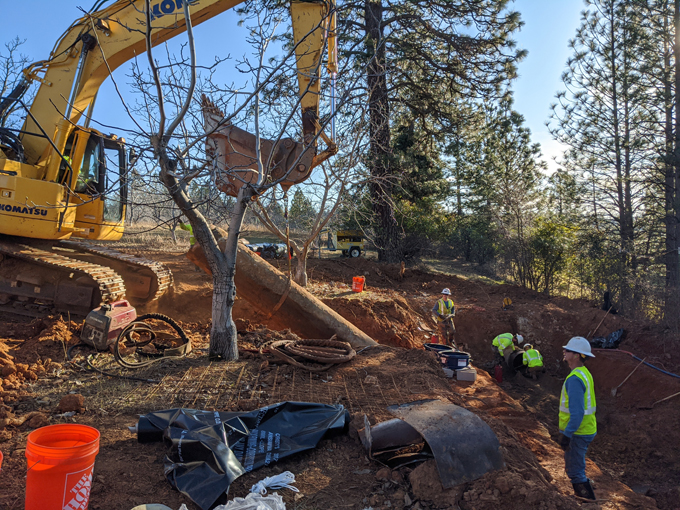 AGING PIPELINE REPLACEMENTS: $38M
Recent water line breaks—including the significant water main rupture in spring of 2019 that closed El Dorado Hills Boulevard temporarily—have highlighted the effects of aging District infrastructure and the lack of reinvestment for replacement. Our community relies on pipelines that are starting to fail at a more frequent rate, necessitating a more active replacement program. Not only does deferred investment increase the ultimate cost of replacement, equally—and perhaps more importantly—the deferral decreases the reliability of the service to our customers and increases the chance of creating public health and safety issues. 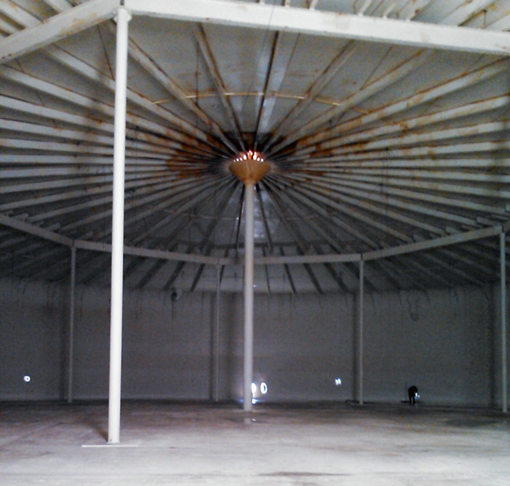 This program consists of targeted replacement and rehabilitation of drinking water storage tanks and reservoirs within the distribution system. EID operates 36 steel storage tanks, ranging in age from eight to 58 years of age, most of which were constructed in the last 18 years as part of the District’s line and cover program. This program is to identify specific tanks and reservoirs to rehabilitate, replace, or upgrade to maintain service reliability throughout EID’s service area.

How do EID rates compare with other water and sewer utilities?

The following charts show how EID rates compare with other utilities in the region for typical residential water use and residential wastewater (sewer) services. The calculations in the charts include the base charge plus the commodity charge for the water used. PLEASE NOTE: All amounts are for bimonthly bills. 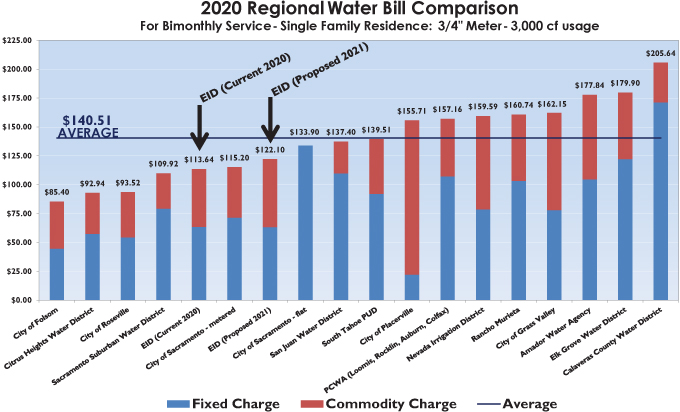 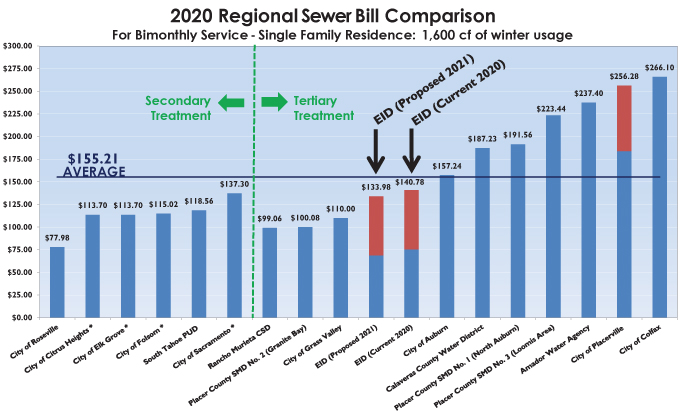